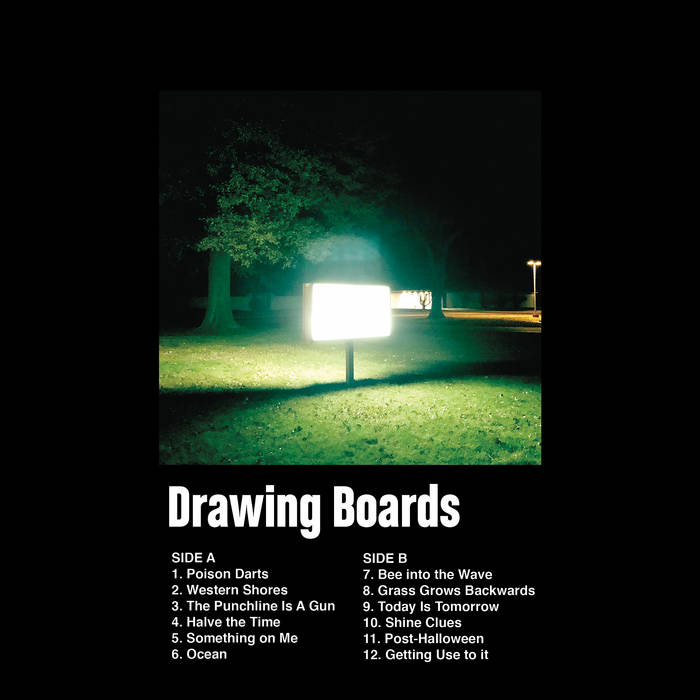 Contrary to popular indie-rock opinion, the past can be squared away, registered for deconstruction, and demolished. Yet here is music: the distortion of time. Drawing Boards, of Queens, N.Y., grapples with this absurdity on its self-titled, debut album. In our digital day, the band uses the classic sounds of indie-pop to reflect on the minutes and the years just passed. Many of singer-guitarist Aaron Pfannebecker’s lyrics deal with a relatable nostalgia. Pfannebecker’s suburban memories evoke a melancholy in the music that carries through the notes played. Singer-drummer Doug Marvin’s lyrics explore the sometimes inscrutable feelings trigged by scent and self-inflicted absences. Throughout the record, shimmering synths, booming head kicks, strummed six-strings, and contorted noise inspire a photo album’s worth of emotions.

Drawing Boards now exists as a quartet owning New York nightclub stages, though the 12 songs of this album began as a bedroom project. Pfannebecker was living at Death By Audio when Marvin's band at the time, Dirty On Purpose, began practicing at the now-iconic underground arts space. The two clicked, and a plan was hatched to record music inspired by their shared influences: R.E.M., Joan Didion, 'Marquee Moon,' Jenny Offill. “We speak the same language,” Pfannebecker says.

Six years and several lifetimes have been lived since those mural-painted Brooklyn walls housed the young duo. On this first Drawing Boards record, notice is posted ("Shine Clues"), Duran Duran is resurrected (“Grass Grows Backwards”), and black candy is noticed (“Post-Halloween”). There’s a sadness throughout the album, even though the songs are also suited to rock house floor-shaking and hip-bumping. Opener “Poison Darts” lifts off with an airy swing, but channels some lost reckoning with its talk of “we could change, and we could know.” What can be proven thanks to this document is that the past ultimately leads to a brighter now. Problems change or fade, eventually, and communion is found. Create now, for tomorrow.

Bandcamp Daily  your guide to the world of Bandcamp